Restspace enables you to program with services on the web. The primitives with which you program are web services, which can be any web service or API on the internet. Restspace also provides you with its own library of web service primitives.

This use of the pipes and filters pattern is a twist to the philosophy of HTTP as a client/server communication mechanism. However it enables a novel and powerful way of working with web services in a pipes and filters style.

Restspace provides a specification language for pipelines. Features of Restspace pipelines include:

These features are rich enough to provide many of the features of a programming language.

A pipeline specification is simply a JSON fragment which is interpreted in a specific way. 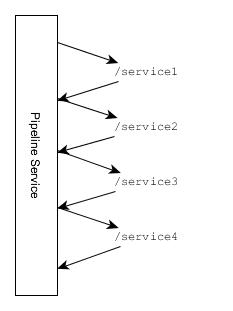 To give you a sense and context of what a pipeline looks like, here are 3 examples and basic explanations of what they do:

When you POST data to this pipeline, the first request POSTs that data on to a path beginning /json/records.

This url for this step uses a url pattern. A pipeline (or most other Restspace services) is associated with a url. The routing system sends all requests to that url and all requests to urls that start with that url to the pipeline. We call the url a base path, e.g. /my-pipeline. When the pipeline is called, the rest of the url after the base path is called the service path e.g. for /my-pipeline/abc/xyz, the service path is /abc/xyz.

Url patterns contain codes or macros which are substituted by elements of another url called the context url. In this case, $* means the service path of the context url, and the context url is just the url of the request that invoked the pipeline.

You can see how this mapping enables you to post to any resource that starts /json/records, e.g. if you POST data to the pipeline (which is on a base path /my-pipeline) on /my-pipeline/mno/pqr, it will post that data on to /json/records/mno/pqr.

After it does that, it will POST to /sendemail which we assume, sends an email as an indication that the data was written.

If a pipeline request fails, the default behaviour is for the pipeline to terminate and return the failure message. Because this pipeline is serial, that means we can be sure the data was written if the email is sent.

This pipeline fetches an order item then in parallel, fetches the related order and user data, then returns everything as a combined json object.

So we see 3 pipeline steps to be executed in parallel. The tilde(~) prefixed parts of the step specifications gives a name to the output of the step. The first one is a special case: there is no actual request, we are just giving a name to the data passed in which is passed straight on. The special name $this is relevant later.

The other two requests use the ${<property>} url pattern which is substituted by the value of a property (or property path) from the body of the previous request.

A pipeline is made up of a list of elements. A step can be one of the following:

The above illustrates the components of a Pipeline Step.

fails if the content type is not some json type

fails if the name of the message is not 'body'

The pipeline in conditional mode operates as if it were serial next end mode. This means the first step or subpipeline with a succeeding condition is the only one which is executed in the rest of the pipeline.

When the conditional mode pipeline has a subpipeline, its default mode is not parallel as it would normally be but serial. This supports subpipelines representing chains of conditional actions.

When the conditional mode pipeline ends, if the message was converted from a failure to a success with error data, it is now converted back to a failed message before being passed back to any parent pipeline. This means the conditional steps in the pipeline act like exception handlers, and if none is triggered, the failure is treated as normal. 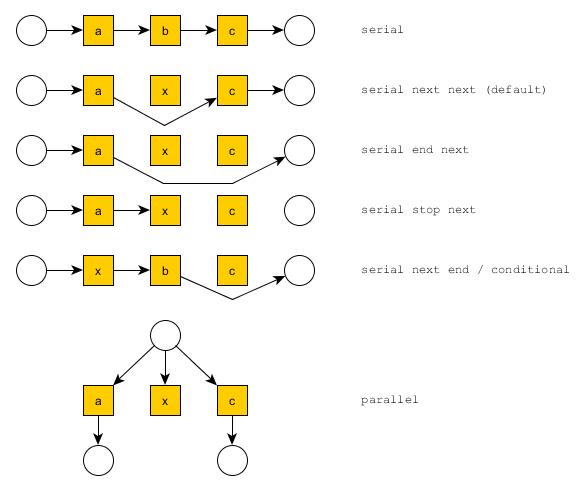 A pipeline can also manage more complex graphs of services, running services in parallel, splitting compound messages, processing the parts and merging them. A pipeline can have subpipelines which are configured by creating a subarray in the array representing  a pipeline. Each pipeline or subpipeline is a context in which execution proceeds in a given mode. A mode can be parallel or serial, and in a serial mode you can specify how the pipeline behaves when encountering a step whose condition succeeds or fails.

When starting parallel mode, each message in the pipeline is copied once for each step in the parallel subpipeline and passed to those steps in parallel. Messages with streams in their bodies have the streams forked for each copy. The messages output from the subpipeline continue along the parent pipeline in parallel. When multiple messages are being processed by the pipeline at once, each one is labelled with a name (described in more detail later). In this case, the default name is the zero based position index of the step in the parallel subpipeline. If the step has a rename specified, this name is used instead.

A transformation is an object in the JSON specification. It defines a JSON transformation to be applied to the body of the message. Essentially it outputs the JSON object given with every string-valued property interpreted as an expression based on the input message JSON. The expression is Javascript with some additions and some limitations, notably no literal functions are allowed. See Transform service for more details.

If there's a condition on the first element of a subpipeline, the entire pipeline will not be executed if the condition fails.

The targetHost directive has one argument, a domain with a scheme, which indicates the default host for the pipeline. All site-relative urls (i.e. beginning with /) are sent to this domain, and any Authorization header sent with the initial request to the pipeline is forwarded to this domain.

The pipeline implementation is designed to maximise the efficiency of all operations. Operations following on from operations being run in parallel are started as soon as the previous operation returns, rather than waiting for all previous parallel elements to complete. Data is held as streams (which are forked if necessary) for as long as possible, so that data can start being returned from a pipeline as soon as possible, before all pipeline operations have completed.